The lure of the river was too much to resist. I was back again last night, choosing to fish beyond the beach, and yet again having to batter down the balsam to make myself comfortable. The river was slower and clearer still. The sky clouded and a stiff breeze blowing from the south west - although the bank behind me provided shelter and the tops of the trees on the wooded bank being my only indication of it.

As there was still some feeder mix left from Monday that was to be my approach again. This time I'd left the big feeders behind (along with the umbrella to keep the weight down) and topped up with 2oz Korum cage feeders.

It didn't take long for something to find my baits. The rod tips indicating all manner of twitches and pulls. In the shallow margins small fish were feeding and flashing. Putting the binoculars into action the larger ones looked like small chub, the others could have been minnows. I threw in a couple of boilies and some feeder mix and they homed in on it immediately.

Swifts and martins were soaring high above the trees, two herons flew across the river  towards the next bend upstream. The valley was at peace with itself. The air temperature was a little lower than Monday, and as the sun set the air cooled further. I stood up to wind a rod in for a pre-dark recast and saw two herons on the upstream end of the beach. They must have sneaked up river from behind me. One flew away as soon as it saw me rise above the balsam. The other eyed me with suspicion for a few seconds before doing likewise. Slugs were around in the vegetation as was a caterpillar of some sort. 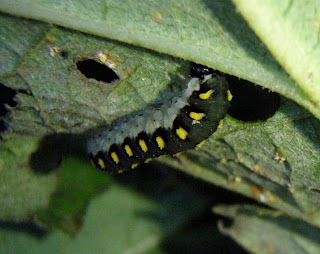 I had to photograph something to brighten the blog!
This swim is one I've fished before and had a couple of nice fish from, but it's not one I've caught numbers of fish from. The plucks and taps continued after dark. I wasn't too concerned by the lack of barbel action.

As it grew darker so the clouds closed up and the temperature rose again. The fleece I had put on earlier was almost superfluous. At ten to eleven the upstream rod, which was fishing nearer the middle of the river than the far bank in order to avoid the tackle grabbing snags, came alive. As soon as I bent into the fish I had the feeling it was foulhooked. It had that same inert feel the foulhooked fish on Monday gave me. Sure enough, the hook was well outside the mouth. Some years ago I had a spate of this happening, but after adding the intermediate swivel to my hooklinks foulhooked fish had been notable for their non-appearance. Maybe an odd one each season. Without changing my rigs I've had two in two sessions. I can only put this down to the combination of low flows and swimfeeders.

I say this because my rigs have been tangling more frequently, too. Not often enough to worry about, but far more than is normal. What I think is happening is that the hook/bait is settling directly on, or very close to, the feeder. This is likely to cause tangles if the hooklink drops onto the feeder. And it might also cause the hooklink to loop up off the river bed, thereby creating a situation where a barbel could catch the line and drag the hook into a fin. Pure conjecture, but in stronger flows with a bag of pellets on the hook I know that the hooklink straightens out downstream of the lead, because I've watched it doing so in shallow water. If the Ribble wasn't so rocky I could solve the problem by drawing the feeder towards me as it settles. Only doing that has a tendency to drag it into a snag. Back to the bags.

The next hour and a half was spent listening to a tawny owl, and making squeaking noises back at it. The owl responded when I got the sound right. The taps and rattles continued sporadically, with the occasional 'bat bite' in between, but nothing more positive.

I removed my fleece for the walk back to the car after writing off a complete rig when winding in the final bait. Maybe I'd dragged that one back when it settled...