Sunshine, birdsong, catkins. Yet when the clouds hid the sun the touch too much of north and east in the wind made it plain that summer was still a way away. It was still a lovely day to be by the water, hoping for a tench to  show up, but great to be out and being refreshed by some angling therapy. This was my first session of the spring, the one where I go as much to see what I've forgotten as to catch some tench. In truth I don't find the tench fishing really kicks off until the hawthorn is in bloom, and even driving south it isn't yet in full leaf. 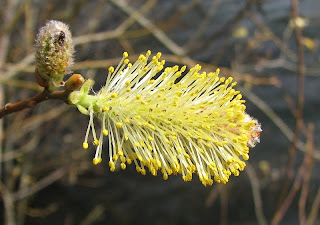 A sign of spring
I also had three new rods, three new reels and  a new pod to try out. One item of new tackle is the kiss of death for a successful session, so all that lot meant I was destined to blank. Doomed, in fact, as I had forgotten what is possibly my most important piece of kit - my lucky spoon. Never am I as disheartened as when I leave my lucky spoon behind when taking the stove to brew up on. It's nothing special. It's just been with me for years and years. Not quite as long as my lucky forceps (which I no longer use but always have in my rucksack) which I've had since the 1970s and have left on the bank, and found the following day,  twice. 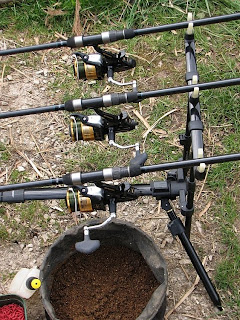 Multiple new-tackle-jinx
Although the rods and reels weren't tested by fish they did the casting and retrieving things well. The 4000D Baitrunners are lovely and smooth. I thought I might not get on with the baitrunner lever operating the opposite way to all my other baitrunners, but it was not a problem. The anti-reverse lever is rather small, and that will take more acclimatisation for me to be able to knock it off to backwind.

The 1.75lb Torrixes coped with the 50g maggot feeder and the method feeder, even with the crosswind blowing. I have a niggling suspicion they might be just a tad too stiff in the butt for my taste for playing tench. But the only way to prove a rod is with a decent fish on the end of the line, so that test is yet to come.

I'm not generally a fan of Fox tackle, although they do have some well designed products which are sometimes let down by the construction, falling apart easily. I hope the pod proves to be one of their robust items. The design suits me really well. It's easy to set up and get level, and (although not designed this way) I can fit it with Korum banksticks to enable me to raise the rod butts high enough to get the tips close to the water when fishing from a raised platform. My fear is that the cams which lock the uprights flap around when there is no stick on the slot for transportation. Not a problem for tackle tarts who have special pod bags, but for lazy gits like me who stuff their pod in the rod sling it might lead to accidental damage.

The fishing was slow. Nothing happened. A carp, maybe two, head and shouldered well out. That was it as far as fish activity went. The rest of my time was spent watching bees and trying to identify distant, and elusive, birds - probably warblers. Warblers always confuse me.

By the time the sun started to set I was wishing I'd packed the bunny suit. That chill makes me think I'll leave the tench alone for at least another week. I have got my fishing head back on though.
Posted by Dave Lumb at 7:52 am