Out and about last week photographing birds I spied some rudd cruising in a small pond. They were only tiny but fired me up to venture forth after tench again - especially as the nights were warming up. 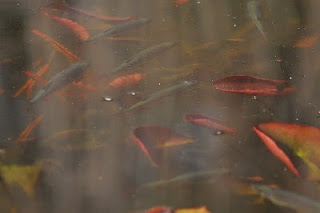 Look closely and there are rudd in the pic
Finding the time to get away for two nights, to make the fuel costs more bearable, wasn't easy and I decided to chance a Sunday evening to Tuesday morning stint. On arriving at the lake the area I fancied was occupied but there was plenty more to go at with the rest of the lake vacant.

It was more than springlike as I pushed the laden barrow round to the west bank where I plumped to fish a cosy little suntrap which had produced tench for me in the past. Unusually my first job was to but the bivvy up, as much to get my gear under it and make space for me to move while plumbing and baiting up. Ordinarily setting up the bivvy is the last thing I do (unless it's raining), but seeing as I have yet to have a bite after dark my efforts were geared to activity the following morning.

The night was mild. No bunny suit required in the sleeping bag. To my great surprise, and greater pleasure, I wasn't troubled by rats during the night. A real bonus. However, I still had a fitful night having 'done my back in' once I had baited up and cast the rods out for the night. What caused this malady I don't know, but every time I moved I got a twinge.

As day slowly broke to the glorious cacophony of the dawn chorus I made a cup of tea before struggling out into the day to rebait the feeders and spod out some more hemp, groats and dead maggots. As the sun rose higher the sky cleared and well before noon it was t-shirt weather again. A light south-westerly wasn't enough to hide fish movements, but there were none to be seen. 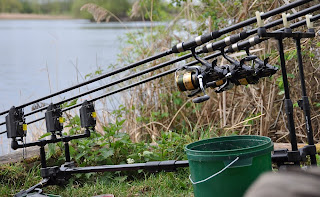 Looking the part
The recent 'heatwave' had brought on a carpet of blanket weed, or filamentous algae, bright green stuff covering the lake bed whatever it is. A change of tactics was called for. The distant in-line maggot feeder was to be swapped to a heli-chod rig. I had to improvise by trapping an in-line feeder on a length of mono between two swivels as I had no standard feeders with me. [Note to self:  put some weighted black caps in the bag.]. The close in maggot feeder rig, at catapult range, had the bait swapped from three sinking plastic casters to three floating plastic maggots - in the hope they would hover above the green gunk, a tactic that has succeeded in similar conditions in the past.

My back was not improving and I contemplated packing in early while I could still walk without pain. Last year's bream session ended that way with me struggling to get out of the car and straighten up when I stopped for a break at the motorway services.

Evening calmed off but still now fish showed themselves -either on the surface or the end of one of my lines. There had been a couple of indications during the afternoon when a coot discovered my bed of bait and the bright orange tutti frutti pop up on the method feeder rig.

I idly amused myself as the almost-full moon rose by watching the clouds of midges forming into vertical columns. Odd how people wax lyrical about the whirling formations of starlings yet never mention midges doing similar things in the air. 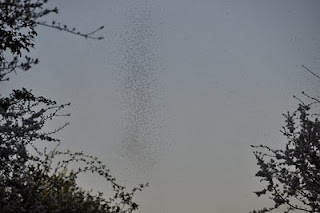 Marvellous midges
The second night was calm and bright - and pleasantly ratless. With no cloud cover the temperature fell, but still not enough to warrant the bunny suit. A hot water bottle might have helped as my back got worse as I feared it would. In the morning I really did struggle to get myself upright. Once I had I dutifully rebaited and recast I slumped back in my pit and fell asleep again. Fishing like that, casting out and waiting, doesn't seem to work for me with tench. But I simply couldn't face the effort of continual feeder filling and recasting. I was hardly fishing at all, just waiting until the day had dried out the condensation inside the bivvy.

At ten I started to tidy the gear away. Doing so must have loosened something up as my back began to feel freer and the painful twinges abated. By the time I had barrowed everything back to the car I almost had a spring in my step. Almost... Such is life when you aren't as young as you think you are I suppose.

I doubt I'll find the time for another two-nighter for a week or more. So Plan B will have to swing into action. A plan that doesn't involve tench!