Time to move on

When you find a reliable spot it's difficult to stop yourself fishing it, especially when it offers a challenge. Nonetheless, I had decided to have a try with the lures for the perch I had spotted a while back during the afternoon before setting up for the barbel again.

Even though we are enjoying an Indian Summer and the sun was beating down at two in the afternoon I cast a small curly tail shad into the crease and let it settle into the slack. Immediately I started the retrieve it got hit and ejected. Then hit again, and again. As it came into sight onto the shelf I could see a group of five or six perch all trying to grab it. This was repeated for five consecutive casts, but try as I might I couldn't get a fish to stay hooked - if they were getting hooked at all. Then they faded away. I tried other jigs, and then a couple of crankbaits that did at least elicit follows from a couple of fish, one of which could have been a chub.

I wouldn't have gained anything by continuing in that spot so I headed downstream to my barbel swim, which I thought might also offer a chance of a perch with the tangle of snags, weed raft and slightly slower water close in. First cast with the curly tail and a perch followed it up, overtook it, came back and had another swipe at the lure off the top. Second cast it came in again, grabbed the lure, kicked around for a second and was gone. All these fish had been in the one to two pound range, and probably had never seen a lure before. I'll be giving them another try some time.

As four o'clock approached I broke out the barbel gear, droppered in some seeds and pellets, and slowly got set up. For a change I put a pellet out. I'd always considered pre-drilled pellets to be a bit of a gimmick but since trying them I have to admit that they are pretty handy things. Well worth the price of a kilo bag. 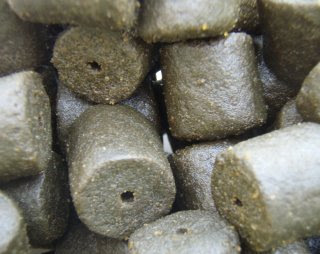 There was still a bit of heat in the sun when the rod pulled round shortly before six and a seven pounder was extracted after getting snagged up - possibly in weed. Half an hour later a more powerful fish found sanctuary and the hook pulled free. Still daylight on a low clear river and two fish hooked. A little more bait went in and I eagerly awaited sunset and the feeding frenzy that was sure to ensue. 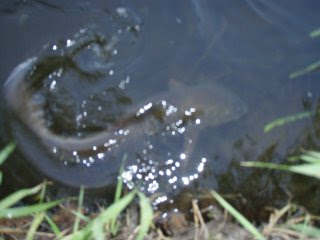 The sky remained clear as darkness fell, and as a result the air temperature fell with it. I wound in and went back to the car for the bunny suit. By ten o'clock all that had happened were a few sharp chub bites. I still had not managed more than two bites in a session from this swim! Fifteen minutes later the rod slammed round and the baitrunner spun. This one was as powerful as the fish I had lost earlier, but stayed out of the snags, and felt really heavy as I pumped it upstream. When it came into view it wasn't as big as I'd expected, but still a decent fish. One problem when the air temp is low and the air still is that your breath condenses and forms a foggy cloud in front of your face that reflects the light from your head torch, making it difficult to see where the fish is as you try to net it. This meant I was quite grateful when the fish finally took pity on me and swam into the landing net and lay still! 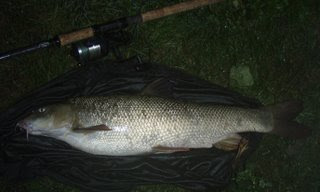 Despite fishing on until the shipping forecast came on the radio that was my lot for the night. I think I'll be leaving that swim alone for a while and doing some more exploring. There's plenty of river still to look at.
Posted by Dave Lumb at 7:12 pm