There's a definite tang of autumn in the air, and for a change the leaves are turning colour before December! There'd been some rain over the weekend but I hadn't been able to get to the river owing to catching up with business following the PAC Convention. By the time I was able to get out the river had dropped a bit, and with the full moon I wasn't too confident. At least there was cloud cover which would keep the air temperature up after dark. There were also a few showers around, but nothing major. Even so it's time for a slight change of tactics.

The session started badly when my fifteen minute hike to my chosen area revealed that part of my low chair was missing. With nobody else on the stretch I left my tackle in the swim and retraced my steps - all the way back to the car where there was also no sign of the missing backrest. I eventually set up around five pm, and was planning to move at eight. Two minutes past eight the downstream rod jerked and the reel handle spun backwards. Some idiot had left the anti-reverse off! It was a barbel, but not a monster despite the change of tactics. 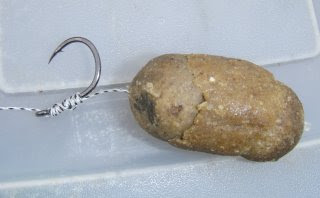 As the water temperature starts to fall in autumn I ease up on the freebies and add attractiveness to my hookbaits in the form of paste. The idea is to draw fish to the bait without feeding them too much. One way is to use the boilie sausage - two boilies on the hair with a 'doughnut' of paste wrapped around the hair between the boilies as per the photo.

Around eleven the cloud cover thinned and the moon shone with all it's brightness. Time to go home.
Posted by Dave Lumb at 7:00 pm