The horror. The shame.

The forecast had been for rain early, clearing in the afternoon, and I set off for the Trent as the morning showers subsided. Travelling south I passed through a few brief showers, but the sun was soon burning down on dry roads. On arriving I could see the river was up, but not quite as much as I had hoped, maybe a foot, but it was carrying a decent amount of colour. However, it was still high enough to make my first choice swim look a bit too pacey. Going further downstream a swim that had looked a bit dull and uninviting on Sunday now seemed perfect. So I put half a dozen droppers of chilli hemp, garlic luncheon meat and pellets downstream on the crease where it passed some trailing willow branches. Then I sat back debating whether to remove my sweatshirt or not as it was getting pretty warm. 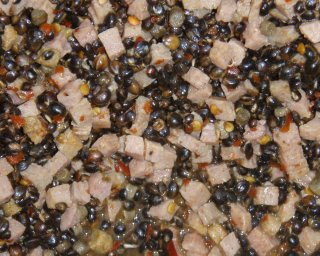 The trouble with reviewing bait is there's no real way of knowing if it makes any difference. But at least I had now thrown all the hemp away and only had two more cans of meat to get rid of! A boilie went upstream on the edge of the crease, and a large piece of meat went on the feed. The plan was to give the swim an hour or two, then move.

I was rebaiting the boilie rod after half an hour when the other one lurched sideways, swivelling on the rod rest, and the line went slack. Drat. I put this down to an over ambitious chub and carried on with the task in hand, from which I was disturbed by the sound of a baitrunner. Maybe there was something in this hemp and meat after all? Unfortunately I failed to hook the fish, I think because the hook was tangled - it certainly was when I wound in. This incident decided me to stick it out. There had to be more fish around, and dusk would be a prime time in a swim like this.

Not long after sorting out the meat rod my musings about removing clothing were decided for me. The sun disappeared, the temperature dropped and rain began to fall. Then it poured down! 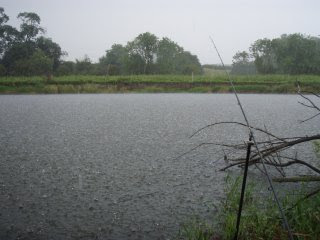 The thunder that accompanied this downpour was some of the loudest, and closest, I have ever heard! I was sure a fish would take and force me out from the shelter, such as it was, of my brolly. But it was not to be. It was not to be for some hours that a fish showed any more interest. The rain stopped, the sun shone again and the rest of the afternoon was lovely. I took the opportunity to have a wander round, but nowhere else took my fancy. I'd stick it where I was until after dark.

Around four o'clock the river began to drop. Not quickly, but the nature of the swim was changing. If the level had been falling faster I would have moved, but things were borderline. Eventually the boilie rod, which had been swapped to fish by the willow, was away. I hauled into the fish as the line was going under the branches. It headed out into the river and rolled. Oh, no! It wasn't a barbel... 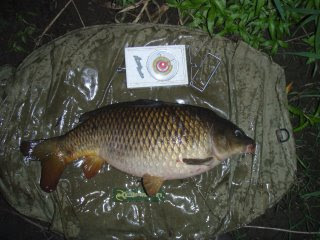 Whoever said that carp, river carp even, fight harder than barbel (pound for pound) must have been an idiot. I've had a few on barbel tackle now, to fifteen pounds odd, and not one of them has been a match for an eight pound barbel.

That c**p knocked my confidence a bit, the barbely feeling the swim had exuded initially had gone, and it wasn't long before I packed up.
Posted by Dave Lumb at 9:47 am