I just had to get away from working yesterday. So I loaded up the gear and decided to go check out the upper Trent for a change. It would have been easy to have dropped in the first spot I looked at as it was quite appealing, the second stretch had a couple of even better looking spots but after a while sussing the third length one swim simply had to be fished. Best of all the swim was tucked away in some undergrowth.

Out went a few droppers of Dynamite Frenzied Chilli Hemp (which I was using as I am supposed to be writing a review of it) and some more of mixed pellets. 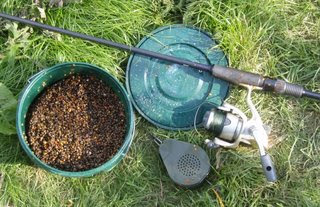 The dropper rod in the photo is a fairly stiff six foot thing I knocked up specially for the job (built on a prototype lure blank that wasn't quite right) and the reel a robust Shimano with a decent grip on the handle for cranking the biggest dropper back against the flow.

After putting the obligatory boilie and bag of pellets downstream above the overhanging willow I rigged up a second rod with a maggot feeder to fish upstream for a change. Who says I'm not versatile? A size ten Kamasan Animal tied to 20lb braid and crammed with half a dozen maggots being the subtle end rig. On the second cast I had my first upper Trent barbel in my hand. 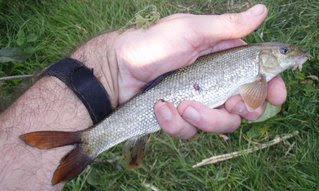 I hadn't blanked, and I'd caught a barbel! The maggots were getting plenty of attention and if I'd fished more appropriately for them I reckon a decent bag of chub and dace, and maybe more baby barbel, could have been put together. As it was a chublet and a dace managed to get hooked.

When the heat started to go from the sun I swapped the feeder rig over to a straight leger with an 11mm Sonu S-Pellet (also free) on the hair. These pellets have a good oil leakage, are easily hair rigged, but are prone to disappearing from the hook - either for no apparent reason, or because they have been nibbled away by small fish. However I do like the smaller ones for adding to my bags of pellets that go on the hook and would buy them for that purpose if I had to. About a third or a quarter of the bag's contents being S-Pellets and the rest hard pellets. In fact they are the 'magic beans' I was using in PVA bags when I was tench fishing in the spring! Anyway, it wasn't long before something headed downstream with my S-Pellet. A barbel of four or five pounds, actually. But still the downstream rod tip, in the prime spot, remained inactive apart from indicating odd bits of weed and debris brushing the line.

After dark, when the tip stopped being inactive there was no mistaking it. The rod lurched over, the bankstick fell sideways and the Baitrunner screeched! Assuming this was the result of a barbel making off with my boilie I picked up the rod and leaned into the culprit. A short but hectic fight saw a decent fish dive into my waiting net. Leaving the fish there in the water I set up the camera, got the sling and scales ready and then lifted it ashore. Not a double, but a nice fish for a first session on a stretch nonetheless. 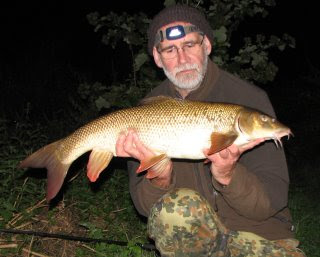 The burdock reference? That's the plant that forms my leafy halo!
Posted by Dave Lumb at 1:33 pm