Back in November I began my winter pike campaign.  Before I'd got my third bait in the water on my first session the second bait I'd cast out was taken. A lack of practice saw me wind down from an unfavourable angle and not hard enough only to feel the pike (not big) and fail to set the hooks. Not to worry, the conditions were good and the pike were feeding. I'd get a chance or two more before dark. Three swim moves later I packed up having blanked. There ended my piking for 2021...

I hadn't really enjoyed myself. Moving swims was a pain and failing to catch anything even more of a disincentive. I have no patience for blanking these days. In the past I'd happily settle into a swim before dawn and stay there all day regardless of how little action I had, then pack up after dark. Now I get bored if nothing has happened after half an hour. This only seems to be the case with pike fishing though.

Since that November session I've come close to getting the pike rods out again, but something has always seemed like a better option. From going out with a camera or staying home and putting the kettle on again. Today was different. I had vaguely planned to have a pike session when I got up by getting something quick to heat up for tea out of the freezer. Then I went to the Post Office and off to pick some work related stuff up. When I got back it was time for lunch. I nearly didn't bother putting the rods in teh car but I got that autopilot feeling as if something was making me get eth gear sorted. By one thirty I was unlocking the car park gate. The day was fresh and bright. A gently cool wind was rippling the water and I had the place to myself.

I went for Plan B and walked to get the wind off my back. The first bait, a lamprey head, was dropped in the margin to my right where I've had pike from before, the herring head went out to what will be a lily bed come summer. The third rod needed re-rigging before casting another deadbait out to my left. The float stops had perished and fallen off. I have a feeling they were cheap, unbranded, ones I'd bought in bulk rather than the ones I have always used in the past which last for ages. That'll teach me. It was getting on for an hour before I gave in and moved to a swim I'd been looking at across the water. A swim that had been Plan A. 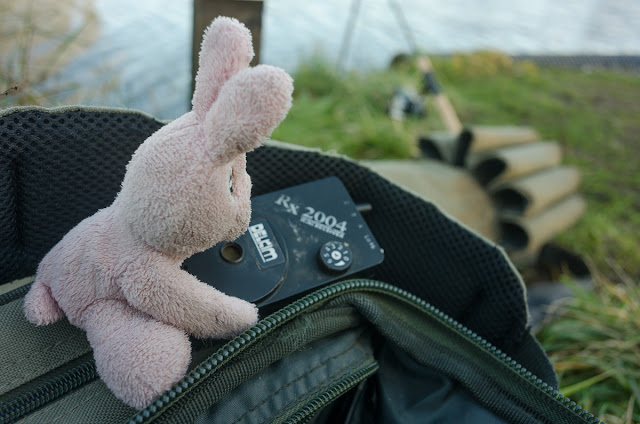 One time this swim did me proud and from one spot. The lamprey head went straight in there. There are a couple of other spots which look like they should produce, but haven't done for me to date. With all three rods fishing and the alarms set I settled back in my low chair, my mind not thinking about fish. I was soaking up the scene. All the leaves were gone from the trees and bushes, and the hawthorn berries which had been abundant in November had disappeared, no doubt down the necks of winter thrushes. They were mostly gone too. I only saw a single fieldfare.

My session in November had been the debut outing for a new winter hat. A peaked affair with faux fur ear and neck flaps. New hats are always a curse so I should have expected to blank. thinking of this made me doubt my choice of headwear. A new woolly hat. While this was it's first fishing trip I had worn it a few times when out with a camera and just going to the Post Office. Maybe that would help?

With these idle thoughts in my head, and despite having gone deaf in one ear recently (I suspect a build-up of wax) I heard the warble of the sounder box. A quick scan of the floats and it was the lamprey on the move. This time I remembered how to 'strike' a pike run. Pint the rod at the fish from as low an angle as you can, then wind down hard. Success! I felt the weight of the fish and a head shake. Then it did a good imitation of a wet sack and was straight in the net. It looked about eight pounds so I left it there while I got the unhooking mat and forceps ready. The forceps live in the same rucksack pocket as my scales and sling. Pulling them out I decided I'd check the weight for the hell of it.

This was one of those fish that saved its fight for being on the bank and gave me a severe case of knuckle rash. It's amazing how much blood spills from the graves across the top of your knuckles. 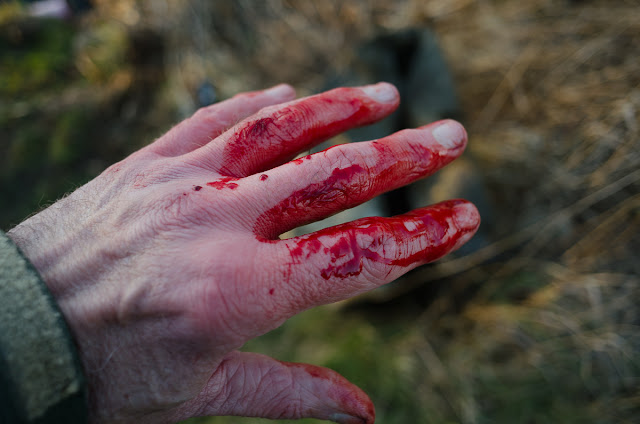 I got a pleasant surprise when the needle on the Avons did a full sweep and a bit more. Not only out of practice with hooking pike, out of practice at estimating their weights.

Now I was feeling confident. Confident of another take from the same spot. Ordinarily I'd have made one more move before dark but something kept me where I was.

The wind was dropping and the sun dropping lower. I found myself looking at the colours of the reedmace against the sky reflected in the calming lake. Painters' colours. Reed stems of Naples yellow, burnt umber seed heads and pale, Payne's grey water. Wintry but not melancholy.

As the light faded a robin visited me briefly. I had nothing to tempt it to stay longer. Then it was time to leave myself. Should I have made that last move?

I'd enjoyed this session more than the last. I hadn't gone because I thought I should, I went because I couldn't help myself. That's how I am with fishing these days. It shouldn't be a chore - or a habit. It isn't compulsory.