Every time I have a blank eel session I say it's the last time I'll fish for the bloody creatures. Friday evening was no exception. It seemed like results, if they can be called results, were diminishing with each trip. From a high of non-stop twitches and pulls through lessening takes it had come to complete inactivity. yet the day had been hot and conditions looked good. Same baits as last time, same rigs. I couldn't work it out.There was  one, mournful, single bleep from a Delkim. But I doubt that had anything to do with eels. 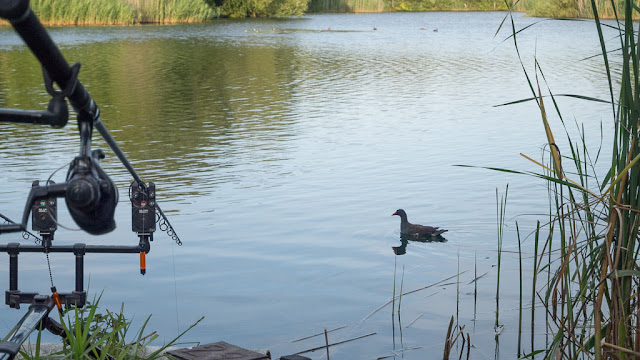 Things were so desperate I considered cutting off the eel rigs and tying on some that might catch me c*rp, tench or bream. Whether it was sense, stubbornness or stupidity which prevailed I'm not sure but Saturday saw me picking up a small tub of worms with the intention of using them on Sunday after the Cricket World Cup Final. That plan was kiboshed by the excitement of the match and the ensuing celebrations which left me in no state to do anything much. It would have to be Monday instead. 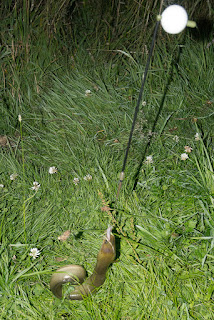 I'd been watching the moon for a few evenings and something about it was making me think my eel prospects might be improving. Monday had been hot and still. As I settled in to my chosen swim the sky began to turn cloudy as the waxing, almost full, moon rose. I'd barely set the bobbin on the legered worm rod when the one on the off bottom rig signalled action. Fifteen minutes later it was the leger bobbin signalling eely interest. And so things progressed. The inevitable frequent twitches, pulls and even runs from bootlaces when fishing a couple of dendrobenas on the hook. It was going to be another evening of annoyance with nothing to show for it but an empty worm tub.

I listened to the reed and sedge warblers making their raspy calls. Spent a few minutes watching a willow warbler (or was it a chiffchaff) working its way around a willow less than six feet from me. And got an early sense of approaching autumn as starlings gathered before settling with a gently chattering rustle in the reeds opposite me.

At ten to ten I had the surprise of feeling something wriggling on the end of the line when I struck after a series of twitches to the off bottom bait. An eel at last! Not much of an eel, but an eel. It did rather confirm my suspicions that the twitches and pulls were from similarly sized pests.

By now it was gloomy enough to need the head torch to tie up a new hooklength. I had pelnty of wire hooklengths made up but none with the hooks I prefer for worm baits tied to the Kevlar braid I use. It didn't take long to have one attached, baited and back out. 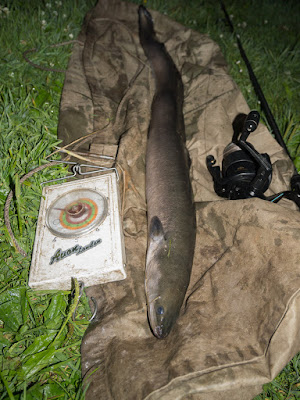 It was ten fifteen when yet another burst of activity came to the off-bottom worms. Slightly more positive twitches which when struck at met solid resistance. This time I reached for the landing net. Having made myself a 50 inch net a couple of summers ago it hadn't been put to the test before. This was the sort of eel I wanted it for and it went in first time. Phew!

With the net secured the scales, sling and camera were sorted out ready. The eel had unhooked itself in the net so there wasn't much wrestling needed to get it in the sling and weighed.

A few snaps taken of it laid alongside rod and scales as it wasn't quite big enough to warrant a selfie and back it went in the swim next door.

There wasn't much chaos to sort out so the rebaited  rig was soon back out. It was only half an hour later when the worms on that rod set off on a steady run. Again the strike was into something solid. This one took two attempts to net and needed the forceps to flick the hook out. The scales were also required, and I almost got the camera back out but didn't.

By now the worm supply was diminished. The remaining worms being small and miserable looking. Five minutes after returning the third eel of the evening the legered worm was taken and my strike met with thin air. But asI wound the rig in I made contact with another wriggling bootlace. This one was unhooked and returned before the last of the worms were used on the hook.

Whether these last few worms weren't appealing or the eels had switched off I'll never know, but the alarms remained silent. I was kicking myself for not bothering to take the deadbait bag out of the freezer. Then again the eels might have ignored deadbaits like they had on the previous session.

Fishing has a habit of keeping you guessing and scratching your head. Was the change in success down to the worms, the conditions, the swim choice? Worms do seem to get an almost instant response and this session proved that twitchy takes aren't always from tiny eels. Then again fish baits have done well for me on this venue in the past. maybe the moon played a part as atmospheric conditions weren't notably different to previous nights. Probably the most likely reason for my change of fortune was my deliberate decision to use a pair of matched rods instead of my mismatched set from my earlier sessions. The odd rod stayed in the quiver. Yes. I'm sure that was it.