Anyone seen my marbles?

After failing to take my brolly with me on Sunday evening's eel session, even though I knew it was going to rain a bit, I discovered my overtrousers aren't as waterproof as they used to be. The eels didn't like the rain much and apart from one stealing one of my baits I was untroubled by them. The chill in the wind and the miserableness of sitting in the rain decided me to give up on eel fishing for this year. That left me in a bit of a state of limbo. It still didn't feel right to go piking, not anywhere close to home and I can't be bothered travelling, so what to fish for? 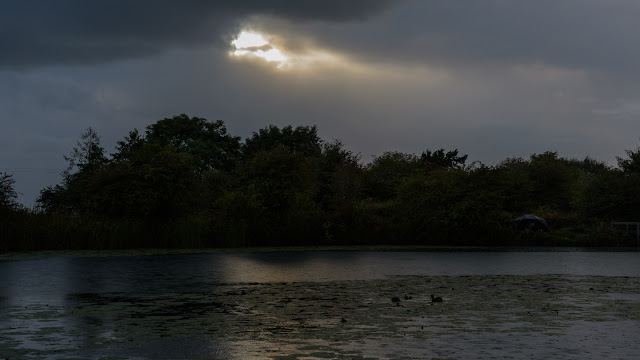 That wasn't a decision I had to make for a few days because the evil of work prevented me even having the time to get in an evening session until Thursday. Remaining undecided it wasn't until Friday afternoon that I snapped and put the gear in the car to have my first try for the almost-tame sturgeon.  I'd had a look at the palce a few weeks ago, tackle in the car, and got as far as putting the banksticks in before I realised my reels were loaded with the forbidden braided mainline. I managed to avoid paying for a ticket in the few minutes before I left in embarrassment, so it wasn't all bad.

Last minute sessions fishing for something different are always likely to result in something being left behind. I could have sworn I put the tub of sturgeon bait in my Multi-Mat, just like I could have sworn I put a stick of Pepperami in it a week or so back. The Pepperami disappeared into thin air and it looked like the sturgeon bait had too when I came to stick it on my second rod.

I'd arrived around two pm to find three carp anglers blanking away as I walked round the tiny pond. Previously you could have driven round the perimeter of the pond, but after recent rain it looked a bit dicey. I picked a swim as far from anyone else as I could and with firm ground behind it. Everywhere looked as unlikely or likely as everywhere else so I wasn't too fussed about swim selection. This time the eel rods had mono on the reels. All I had to do was tie up a couple of hooklinks to comply with the maximum size 8 barbless hook rule and I'd be in business. The bailiff came round before I had the first rig tied and I handed over the cash.

As I'd taken my eel/catfish tackle box the best I could manage for the hooklinks was 80lb kevlar braid. This proved to be a struggle to get through the eyes of the hooks. But I managed it. The simple plan for this first session was a wafter on one rod and sturgeon bait on the other. While I was rerigging the rods I spotted some bubbling to my left and it seemed as good a place as any to swing out the wafter with its attendant bag of pellets. Then I tied up the other rig and that was when I discovered my bait was missing. Everything came out of the back of the Zafira but still no sign of it. Arse. If I hadn't paid for my ticket I'd have done another runner! Plan B. Fish for c*rp with both rods on the off chance the mug I was after would make a mistake. I had some 16mm pellets in the pellet tub so I chucked one of those out. 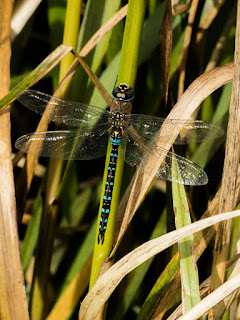 There was a definite autumnal feel to the day. The leaves on the distant trees were shades of umber and terre vert, pheasants were scurrying into the maize and a migrant hawker was on the wing. Despite the sun a cool wind was scudding the fluffy white clouds across the cerulean sky and making it cool enough for me to need my fleece.

I'd not been there long when two more vehicles arrived and the anglers walked round the pond. When they got back to their swims it was obvious they were on for at least one night. I'm not sure if I was amused or annoyed by their behaviour. Amused I guess. First the carp cradle was erected, then the chairs, followed by the bivvy, and finally the ritual hammering in of banksticks. It was while watching these antics that another patch of bubbles spread across the surface right where my wafter had landed. Minutes later the alarm sounded and I found myself with the ten footer bent into a carp. It didn't get the chance to take any line and despite pulling a bit was soon in the net where I left it while I got the scales and zeroed them. 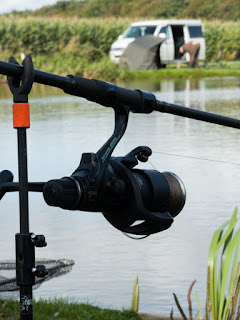 Net onto mat, fish into sling, sling hoisted and scales read, fish slipped back. All nice and simple. I only weighed the thing because I'm crap at guessing carp weights and I thought it looked a double, which it was. Rebait, recast, consider packing up. Less than an hour's fishing didn't seem like good value for how much I'd paid and what I'd caught, so I thought I'd stick it until five. Around half three I started watching a chap on another pond playing a fish on the pole. At four thirty I saw him net it. What a lot of fuss to land what looked like a not very big carp.

It was about this time another carper arrived and set up his massive overnight erection two swims away from me. I departed shortly afterwards. Note to self: avoid Friday afternoons here.

Despite the obvious drawbacks of other anglers on a tiny pond I'll be back a few more times when I'm bored. I saw some interesting signs which might lead to something unexpected. But will probably lead to more pesky carps. No matter what happens, I'll be double, and triple, checking that I have everything I need wherever I fish and whatever I fish for next time out!