Some people can tell you the exact dates that they caught their personal bests, some even know the dates of other big fish captures. I honestly couldn't manage to recall even the years in which I caught any of my PBs. It's not something I find important. However, there is one date associated with fishing that has long been etched in my memory. The date I caught my first double figure pike. It's not the fact of the catch that makes it memorable, it's because, when written a certain way, the date is palindromic. 28/2/82. If I was American then it would have had no significance to it at all. 2/28/82. Meh.

Eagle eyed readers will have twigged that I caught my first double figure pike, two of them in fact, thirty years ago today. As I have been fishing the same drain system I started 'seriously' pike fishing on back in 1981 it seemed fitting to drag myself there to mark this anniversary.

I can't say I was brim full of confidence, or particularly eager, when I got out of bed at quarter past five thsi morning. A quick check on the interweb to see what the weather had in store for me was cheering. It was set to be dry all day. With that in mind I removed my brolly from the quiver before loading the car. When I'd got everything sorted and was locking the back door the light from my head torch revealed tiny glistening spots falling earthwards. I got the brolly and slung it in the car.

I'm starting to get a little tired of doing the same old same old on the drain. It was fun working on a fresh approach earlier in the season, but now it's become a bit of a routine. Lamprey on one rod, macky on the second, and something unlikely on the third. Cover both margins and move about a bit. It works well enough. It's got to be mechanical though.The thought of catching a bigger pike than I have had so far this winter isn't enough of a driver, I want to be learning something.

Despite the persistent mizzle I worked  a bit of a sweat up trekking to my swim and getting the baits out. It must be getting warmer because I spotted a snail on the move. When I came to pack up my rucksack was alive with small slugs and fat caterpillars. The invertebrates are waking up. The pike were too. Before I had my third bait in the water the lamprey was away. I connected briefly with a smaller than usual jack that charged around like a mad thing before shaking itself free. Going on my recent one-jack-days I feared that would be my lot.

The gods smiled on me after an hour or so when something picked up the headless joey. This time the strike met with a firmer resistance. There was no charging around. There was no fight at all. This one merely wallowed and let itself be dragged over the net. It looked to have been in the wars so maybe it knew what was in store when the steel went home. At first glance I put it around thirteen pounds. Lifting it I wasn't so sure. The scales, indeed, upped my estimation a little. Would I get one more to mirror that day back in 1982? 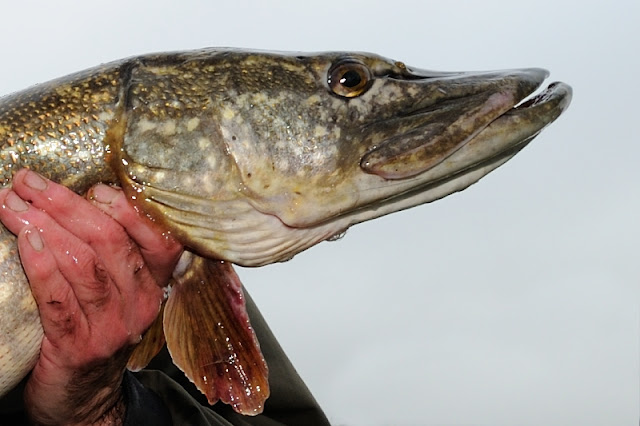 On the unlikely-bait rod I was going for the big one. I'd put a half pound dead bream in the cool bag last time out and bottled it. When it had thawed sufficiently to sink today I'd cast it to the far margin. My legs don't turn to jelly when I get a run, not even at the big pike meccas, but when this bait started to move I admit I thought about getting exited. Briefly. The float was heading upstream when I wound down anticipating the rod being pulled from my grasp by leviathan. It was not to be. An eight pounder with eyes bigger than its belly had snaffled the bream. Or tried to.

The mizzle had threatened to stop a couple of times and the sun had made a half-hearted attempt at breaking through. The forecast had been way off the mark. I had a few bits of work to do and  a customer due to collect a repair in the afternoon. As usual when I have to get back I'd not taken any food. Twelve was my cut-off point and when it came I wound the rods in satisfied with the morning's sport.

History hadn't repeated itself. I didn't manage a brace of doubles. The combined weight was about the same though -  a pleasing symmetry of sorts.