I wasn't expecting that

My courier arrived far sooner than expected, and with the evenings starting to draw out I leapt at the chance to take the maggots I'd bought on Saturday for an afternoon out. River or stillwater? I was drawn to a try at some lake roach, so that was where I'd headed. I pulled up by the swim I had in mind. No cars there so it would be free. Straight out of the car and across the lane to peer over the wall and scope out the water. Er, not quite. Scope out the ice, more like! I knew there'd been a frost but hadn't expected it to have been enough to freeze the lake. Still, it is The Land that Time Forgot. 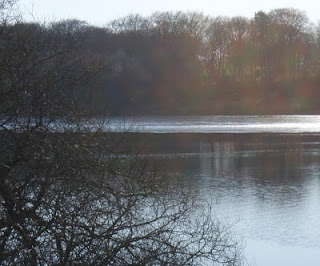 Icy in the shade
On the other bank there was free water , and two anglers occupying the swims I would have plumped for. Only one thing for it, drive round and have a look if the third choice swim was free of anglers and ice. It was. Because the rods were ready rigged up all I had to do was put the sticks in, clip on the feeders, bait up and cast out. I was soon in business and able to sort myself out. The first job was to remove the fleece from under my bunny suit. What a joy it was to fish unencumbered by waterproofs and fleece. If there'd been no ice I'd have been set up in the shade and probably shivering. Here I was getting the full heat of the sun, and with no wind to speak of it was positively balmy. 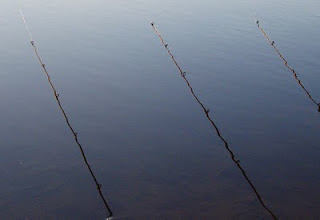 High pressure, flat calm, tough conditions
The air temperature was around 8.5, the water was somewhat cooler at 3.6. Always a chance of a roach or two though. I'd have three and a half hours or more to attract some to my feeders. I rang the changes on the hooks, one had a single red maggot, one a single white, and the third one red and one white maggot. All three feeders were filled with maggots, hemp and micro trout pellets as usual.

The sun was so bright I needed my baseball cap (without the woolly hat over the top!) and my sunglasses. The quality of the light made me start thinking of summer evenings, oily ripples spreading from dark dorsals of rolling bream breaking a flat calm surface, bobbins indicating line bites before the fish get their head down and they rise and hold in earnest. You know, the sort of stuff you read about but doesn't happen in real life! 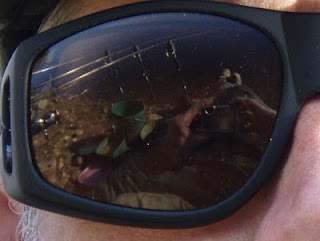 Reflecting on the fishing
I didn't recast too frequently. With the cool water I thought it better to let the hemp and pellets do the attracting without over feeding. As I was winding the left hand rod in for another fill of the feeder the middle alarm sounded and the bobbin was dropping slowly. At first I thought I'd caught the line with the other feeder, but when I stopped winding the bobbin twitched upwards a little. When I picked up the middle rod I felt the lively vibrations of something fishy on teh end of the line. 'The Rig' had done its job and the size 18 had found a purchase. The fish was obviously far from large, but it was a fish. It turned out to be a skimmer. It also turned out to be the only fish from the only bite. 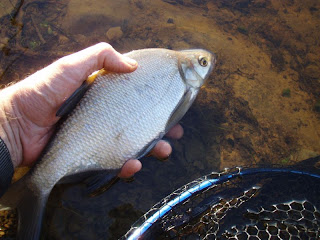 A fish in the hand is worth two in the lake
Not the most productive session. However it was good to be out on a lovely day, and with the fleece not being required until twenty to six, and it still being twilight at half past six when I crunched my way back to the car through the dry beech leaves, it really did feel like spring is just around the corner. There'll be another frost tonight (the air temperature was already down to 4.5 when I left) and for the next few, but the season is turning. I might have more time to fish this week than I first thought, but I can't make my mind up where to fish, or what for.