The Law of Sod

I'd been a good little boy all week, working instead of fishing, which meant that the weekend and most of next week could be spent wetting a line. I had taken a detour on my way back from Liverpool to have a look at a local commercial fishery that has recently opened - out of curiosity rather than a desire to fish the place - and was a mere five miles from home when the car stalled as I turned a corner over a bridge. I managed to keep the engine running as I waited at the level crossing then, knowing there was a junction ahead and cars behind me, I pulled over. The engine died again. I put the hazards on and had a think. I fired the car up after a few minutes and drove home without any more trouble.

This has happened before and the car is likely to stall, or run like a sack of spuds, at any time. It cost something over £200 to sort out last time. So I have that to look forward to next week, and my plans to have an away day this weekend have been scuppered. With the wind howling in from the north west and having brought rain I must admit I'm not too bothered about being stuck indoors, but I can't go a whole week without fishing, so I'll take a chance somewhere close to home tomorrow.

In the meantime here's an embarrassing photo of me with my first ever barbel, caught (in 1991 during my Grizzly Adams years) on a lump of luncheon meat, touch legered on the River Dane... 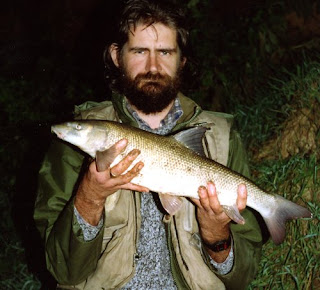 Not even five pounds
...and one of my second caught on a hair rigged boilie from the Ribble 13 years later...

...and my first double, from the Trent, six months after that.

Nearly eleven and a half
I'm lucky to have a photo of that one. The camera batteries died after the shot was taken. It was a cool January night but the Trent fished well while the Ribble had been a struggle. Looking at my results for January through to the end of the season in 2005 I made 13 trips to the Ribble for one four pound barbel, while four sessions on the Trent produced eleven - three over nine pounds. I put this down to the Trent, certainly in the lower reaches, being less prone to rapid temperature (and level) fluctuations in the winter giving the barbel a better chance to acclimatise and settle down to feed.
Posted by Dave Lumb at 5:30 pm