Got my mojo working 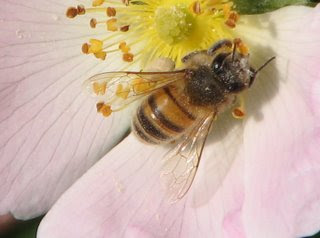 What a lovely summer day. The sun shone, the bees buzzed, England batted and bowled well, and the jinx is off! Only one bite but a fish landed. A strange bite too. The line tightened and the alarm sounded a couple of times as a coot popped to the surface near my maggot feeder. The coot was shaking some weed as the alarm continued to stutter with no line being taken from the reel. With trepidation I picked the rod up, felt something move, yet the coot remained undisturbed. Fish on!

The tench decided that it would kite over the line of my middle rod, then under the line of my right hand rod. After I had sorted the mess out and got the fish clear I saw another fish shadowing the tench, which was around the six pound mark. The shadower was a pike of maybe ten pounds. Needless to say this put the wind up the tench! As the tench swam to the right the pike followed it. When it ran out from the bank out of sight the pike went with it, to reappear behind the tench when I drew it back. Eventually the pike shot off when the tench splashed on the surface just before I netted it. 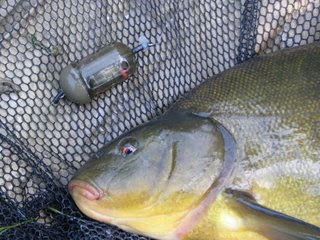 As can be seen, I was using was a Preston Innovations feeder modified to fish in-line. As they come the swivel attachment is weak and will snap off in use. I'm told this fault has been rectified, but it makes the feeders a perfect candidate for modification. After removing the swivel attachment holes are drilled in the centre of the cap and the closed end of the feeder. The holes should be just wide enough to accept the PVC (I think) tubing which is the key to the modification. I drill the holes slightly too small and open them out with a reamer to get the snug fit. The tubing I use comes from and old bulb release. It is the perfect size to grip a size 10 Power Swivel and does away with the need for tulip beads or neoprene sleeves attached to rigid tubing. I fit the feeder to the tube, running superglue around the it where it exits the end of the feeder. When set the tubing is trimmed to length.

My MkI version seen in the photo above revealed a problem in use. The end of the tubing sticking out of the cap was cut too short. When filling the feeder the cap would slide down the line making it a fiddle to replace - by which time half the maggots had wriggled out of the feeder! By leaving the tail a little longer and superglueing a tapered sleeve to it I hope to have solved the problem for the MkII model shown below. Although simply making the tail a bit longer still might do the same job and be cheaper. I'll try both options next time out.