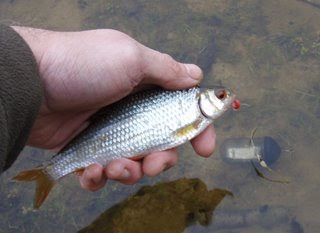 British Summer Time arrived on Sunday, and with it came a light wind and sunshine. Needless to say this brought the masses out and I was hard pressed to find a swim when I turned up at the lake in the afternoon. In a way this was good as it more or less forced me to fish an area that I have meant to fish in the past, and where I usually see small fish topping when it is calm.

The plan (notice how I always have a plan) was to fish two worm rods and a mini-bolt rig with a single maggot - all in conjunction with 40g Black Cap feeders. I know there are roach and perch to be caught, although not to what size they grow. So, having my perch head on the worms got priority. It only took a couple of small roach, after an hour of recasting the feeders to see one of the worm rods swapped to fish two maggots.

This was only a short session, but bites increased in frequency to the point I was expecting big things to happen as darkness approached with the day being bright. However, the opposite occurred and bites dried up altogether. I ended up with nine or ten fish, all small. Mostly roach but a skimmer, a tiny perch (maybe they are all tiny in here) and a surprise rudd. Even though it was minuscule it reminded me how pretty rudd are, not having seen one for a long time.

Wednesday came round and I decided to spend a little longer on the lake. The reason behind this session was to decide, or try to decide, which rods would be best for some 'proper' roach fishing. The Interceptor I had been using was a bit stiff in the tip, as it is for perch fishing. Yet the Avon Specialists that are so good for perching feel a bit lacking in oomph for punching the feeders out. They coped okay with no wind to contend with, but if there had been anything stronger I reckon it would have been a struggle, and they won't cope with heavier feeders either. Rummaging around I found a Chimera Specialist 1 that felt like it might be nearer the mark. It was duly rigged with 'the rig' (which I intend to devote a blog to when I get time - there's a clue in the top photo here) and stuck in the quiver.

The swim I fished on Sunday was taken, in fact the lake was almost as packed as it had been then. I set up a couple of pegs away and started casting two feeder rigs, both fishing a single maggot, using the Interceptor and the Chimera 1. The third rod fished a worm with a maggot feeder. It took a couple of hours before an indication of fishy activity, and another hour before the first small roach was landed. As before, bites increase in frequency as the afternoon wore on. This time it was roach all the way, all small, with the biggest (which might have pushed six ounces) coming to the worm rod! 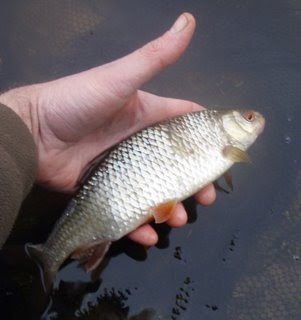 I gave it until half seven before packing up as I wanted to compare the casting potential of the rods. Although the Chimera 1 does have a slightly more forgiving tip than the Interceptor (the 1lb 10oz model) the distances I achieved with an empty feeder were pretty much identical - gauged by counting the handle turns on the retrieve. For the time being the Chimeras will be my distance roach rods, despite them being a rather heavy blank. But what I really want is a 12ft version of the Avon Specialist. I reckon that would be bob on. Lengthening the tip section at the spigot end would force the butt section to be thicker, and so stiffer giving it the additional beef for casting the feeders. As the rig is a self hooker striking power at range is immaterial with fish playing capability the overarching requirement.

I also took time to play with the underwater function on my Olympus compact. I think more practice is required!