At least I know that there are barbel where I have started fishing, and not a population of red herings. The river was a couple of feet up when I first set eyes on it, which actually made it easy to read as all I had to do was look for slower water at the tail of a nearside eddy and drop a bait in the right place. For a change this summer the sun also shone, so the insect life was plentiful, and when they weren't eating each other they were trying to eat me. 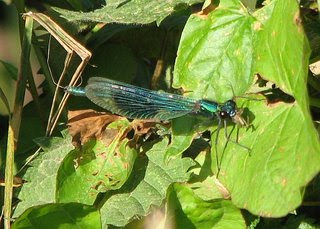 The first spot really looked the business, and I'm sure that had I stopped in it until dark I would have had barbel. However, that wouldn't speed the learning process, so a move was called for.

In the third swim back to the car park I decided to fish it for a little longer - partly because of the thunderstorm and accompanying rain shower. Although I was fishing right under the rod tip the first bite was a sort of slack liner that went nowhere. It was intuition that made me pick the rod up, it just 'looked' like a bite rather than more weed. On tightening down there was a weight, one that suddenly flew off downstream! 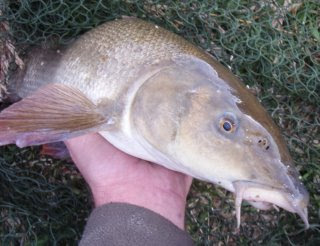 By no means the biggest fish in the river, but the first hurdle on tackling the new venue had been cleared - a fish on the bank. Shortly after dark the rod pulled down in a slightly more decisive manner and another fish of a similar size was landed.

As I was travelling light with one rod I had chosen to give the new rod a try out for barbel. As I suspected, it wasn't my kind of barbel rod as it didn't give me the control I have come to appreciate from the Chimera 3 - not even over the smallish fish I caught!

For the second session I headed for another stretch, armed with the heavier rods. Again the sun was shining, and the river still up and coloured. Although I managed a few abortive chub bites no barbel showed any interest. Not a wasted trip though as I had a good look along the length. Slowly the picture will come into focus.
Posted by Dave Lumb at 5:30 pm