I'd known about this water that was producing plenty of two pound perch for a couple of years but only ever seen it once, on a day it had coloured up over night and with a bitter cold wind blowing.

With the river season over I got word that the perch were coming out but might be about to spawn pretty soon. It also seemed that a few 'threes' were to be had. Having only caught one two pound perch during a previous perch campaign some fifteen years or so ago I decided to have another try before starting tench fishing for the spring and early summer.

So I bought a couple of new reels - one for my perch lure rod and one for my Chimera float rod (which I had built up for the tench) - got some lobworms from Worms Direct and then got up late!

Despite the day starting off sunny it had clouded over nicely by the time I started to set up just after noon. Traditionally perch favour low light levels, so confidence was high. A few minutes were spent lure fishing to see if anything might show itself, but it didn't. The float rod was then rigged up and a lobby hooked up. The tackle was cast out and allowed to drift round on the wind so the worm settled at the foot of the marginal shelf. Then the kettle went on for a brew.

As I sat waiting for the kettle to boil the float dipped and rose. I thought a fish was responsible rather than the wind. It did it again. Definitely a bite. The third time the float dipped it stayed dipped. I lifted the rod and bent into a fish. The jag-jagging told me it was a perch and as it slid over the net I reckoned it was a 'two'. The scales proved me wrong. It weighed 3lb 4oz. I was well chuffed. But I still hadn't had that cup of tea! 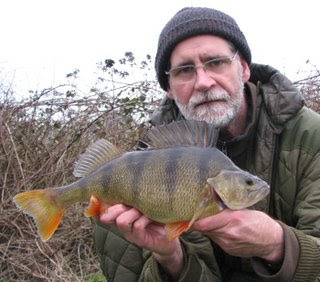 I set up a leger rod with a simple three swan running link and a hooklength of about eighteen inches. This was cast out to my left so the float rig would drift away from it, and further out from the shelf to fish slightly deeper. Then the kettle went back on. Yet again it hadn't boiled when the float buried. This time the fish felt heavier, flashed deep down and looked huge! Then it popped up and proved to be a bream! Hi ho.

Eventually I got the tea brewed and settled down. I was rummaging in my rucksack for something when I heard the Delkim bleeping. I turned round just in time to see the light bobbin dropping back. Then it juddered upwards again and I picked the rod up before it got to the top. Initially I was dragging a dead weight and suspected a bream until the jagging started. Another perch. When it eventually showed itself it could easily have been time to panic. When you see a fish far bigger than you expect on the end of your line it is all to easy to 'lose it' and either play it too gently or to bully it. I managed to do neither, all went well and it rolled over the net without mishap. On the scales the needle turned past 3, then past 4 - well past. That was when I started to go into some kind of trance. 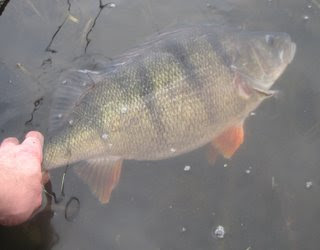 Eventually I managed to get back to some semi-normal state and recast. A while later I had another positive bite on the leger and landed a 2-10, that looked pretty small, but would have been a personal best a couple of hours earlier.

I think I gave up trying after that. I wound in the float rod and put out a second leger - it seemed like a good idea as two fish had come to the method, but all that materialised was one fast bite which was missed.

Do I give the perch another bash before starting tenching, or would it be an anti climax? I'll see how I feel in a couple of days. I can't think of anything else to fish for though.
Posted by Dave Lumb at 10:12 pm